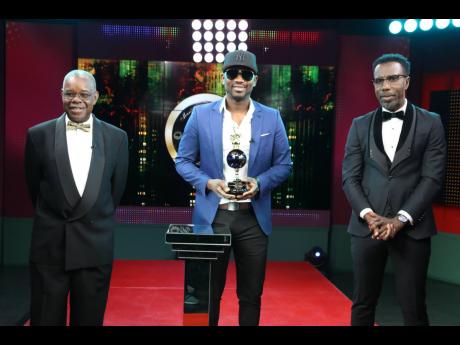 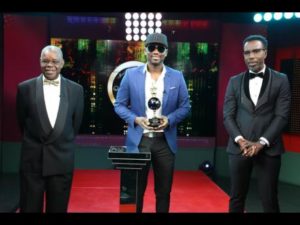 BUSY SIGNAL was recently named Dancehall Artiste of the Decade by the International Reggae and World Music Awards organisers. The deejay, who has religiously contributed to the growth of dancehall while exploring other genres, has hailed the special award as a milestone in his career.

He stepped out on to the scene in 2003 and by 2005, his first hit single, Step Out, followed by his debut album of the same title in 2006, garnered the attention of many within the dancehall circuit. He continued to electrify with tracks like These Are The Days, Wine Pon Di Edge, Unknown Number and Jail, which demonstrated his lyrical dexterity and fortified his name as a dancehall entertainer worth watching and listening to.

“Creating hits every year, international collaborations, the corporate deals and charitable deeds are all part of it; it is not owed to one specific thing,” said the deejay, who has also captivated a target audience across a wide cross section of people, young and old, mastering covers and remixes of old hits like the soft rock ballad One More Night by West London singer-songwriter Phil Collins, and the Commodores’ award-winning Nightshift, to gospel and other folk forms.

Being from the ‘Garden Parish’ of St Ann does not mean it was always a bed of roses. He has had a fair share of the rocky road to success, including imprisonment and extradition, but he continues to maintain that all the challenges faced have carved him into the stature of a man and artiste he is today.

The global popularity of Busy Signal spans his music – locally produced and crossover hits – that are genre-defying, including the chart-topping Major Lazer collaboration Bumaye (Watch Out For This) and Push and Shove, recorded with No Doubt; as well as philanthropic work serving as a human-rights activist in Gambia, earning the official honour by the Zimbabwe Tourism Authority in 2017 to serve as the country’s tourism ambassador; and also launching his Helping Hands Foundation in Jamaica. For the last five years, it has been dedicated to improving health and education standards through providing donations. The entertainer shows no signs of stopping either; he wants to do more life-changing work and put out a multitude of award-winning musical projects. See what he says of things to come in this week’s Five Questions With … Busy Signal.

1. How will you use the Dancehall Artiste of the Decade title to instil more positive changes in the dancehall space for another decade?

Well, it definitely inspires me to keep the focus on continuing what I have been doing. I’m a dancehall artiste that does world music, (so) the more I expand my brand, the more the scope of the genre and our culture broadens. I am always ready to contribute my talent, my creativity and my style before, now, and going forth.

2. How much would you say that you changed throughout the course of your recording career?

Well, the brand has grown tremendously and, with changes, I must say it has become more marketable than ever. However, personally, I am the same person. Those close to me will tell you. I am the same person today I was then, but if we’re speaking to the brand Busy Signal, it is much better.

3. Are you pursuing any business ventures at this time? What we can look out for?

Yes, the ‘Turf President’ is always pursuing business ventures, but the world will have to wait and see (winks). That is classified information, LOL.

4. How are you spending this isolation period that has been imposed on the world due to COVID-19?

It has been tough, specifically because a lot of shows were cancelled; people have been grounded (without any idea when things will get back on track). However, I am trying to keep it busy – mentally creating – and just waiting for the air to literally clear.

5. Well, you’ve released a track in the clouded time, ‘Baby Dance’, which has a lover’s rock vibe to it. Tell us about the mood you were in when it was being written and recorded?

It was really that I was just picturing the ladies dancing to a reggae groove. Moving their bodies to a roots, rocksteady type of sound and flow, and the rest just come to me while recording. I just do what I do.